On a beautiful Wednesday, the day after the elections, we finally launched our dinghy and rowed out to Curtis Island.  This year it became even more important that we visit the island and the lighthouse since we had recently attended a memorial service for “Connie” Conover who had, along with his wife Deede, been the keeper of the Light for over thirty years. This was the first time in our 27 years of living and sailing here that we had stepped foot on this beautiful place.  As we walked the island wondering how many eagles and osprey had nested there over the years, we encountered Deede and a friend who had also rowed out to take down the flag which had been flying at half-mast during the past weeks in tribute to Connie.

Living in Camden gives you the chance to observe the natural beauty around you and also to reflect on how things continually change  and yet the island remains very much like it was when settlers first arrived in the eighteenth century.  We are certainly blessed to live and work here. 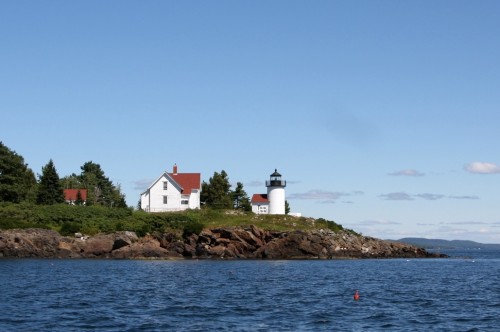 
All sails are two hours.
Maximum 18 passengers.
All cruises non-smoking.
Price: $53 per person
$43 children under 12